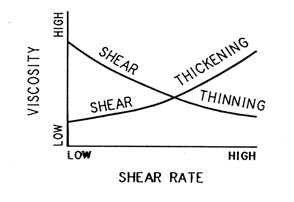 The Handling Shear-Sensitive Fluids guide introduces the classification of fluids into 2 general types, Newtonian and Non-Newtonian. The latter holds a consistent viscosity regardless of shear rate. Non-Newtonian fluids’ viscosities change according to their rate of shear.

For example, paint’s viscosity drops once it is agitated and mixed, i.e. shear thinning, whereas, corn starch is a shear thickening fluid, under high impact, its viscosity rises dramatically. So much so that someone can run across the surface, however, when stationary they start to sink. Non-Newtonian fluids are shear sensitive and therefore require careful consideration when being pumped.

Examples of Non-Newtonian or shear sensitive fluids are as follows:

The shear rate of the butter can be increased therefore by either increasing the velocity of the knife or by placing the knife closer to the toast.

As a result: Shear Rate = (Distance/Time)/Distance

Choosing a pump for a shear-sensitive fluid

As mentioned above, shear-sensitive fluids behave differently when sheared and careful consideration needs to be taken with regards to pump selection. Some need to be agitated to get them to an ideal viscosity to be pumped, whereas some can be irretrievably damaged when sheared too far. It is important to get an understanding of the fluid properties and shear sensitivity from the user or fluid manufacturer when selecting the right pump for the application.

The fluid will shear as soon as it leaves the vessel and enters the suction pipe as the liquid that is travelling through the centre of the pipe is travelling faster than that in contact with the pipe walls. This is also the case when the fluid is being pumped as the rotating elements will be moving the fluid faster than that which in contact with the pump casing. It is almost impossible to calculate the shear rates of the fluids using the above equation and considering the flow rate, pipe dia, internal pump dimensions and rotational speed.

Therefore, when selecting a pump for shear-sensitive fluids, pump design and speed are often more prudent and successful considerations for determining the correct unit. Designs which impart as little agitation or kinetic energy onto the fluids are often the most successful. Such as diaphragm, progressing cavity, flexible impeller, lobe, peristaltic and internal gear pumps. These all move the fluid through rotating or reciprocating cavities which push the fluid through the pump and pipework.

Very little of the fluid is actually sheared and only a small percentage of the outside diameter of the pump elements is experiencing the maximum shear rate. Speeds less than 100 rpm are commonplace when using electrically driven pumps for applications involving extremely shear-sensitive fluids such as latex solutions.

Many sites have tried and tested methods of transferring their fluids and have their preferred pump types. Therefore, combining application knowledge from the user and liquid manufacturer as well as the pump manufacturer is the best way to select a pump for handling shear sensitive applications.

in Application FAQs
Did this article answer your question?

Cant find what you are looking for?