The Air Operated Diaphragm Pump Guardian System is an energy conservation device, designed at Tapflo UK, to protect an Air Operated Double Diaphragm Pump (AODD) from operating in an inefficient manner that uses unnecessary energy and reduces the life of its parts. It also offers the added benefit of providing greater safety to applications of high risk. 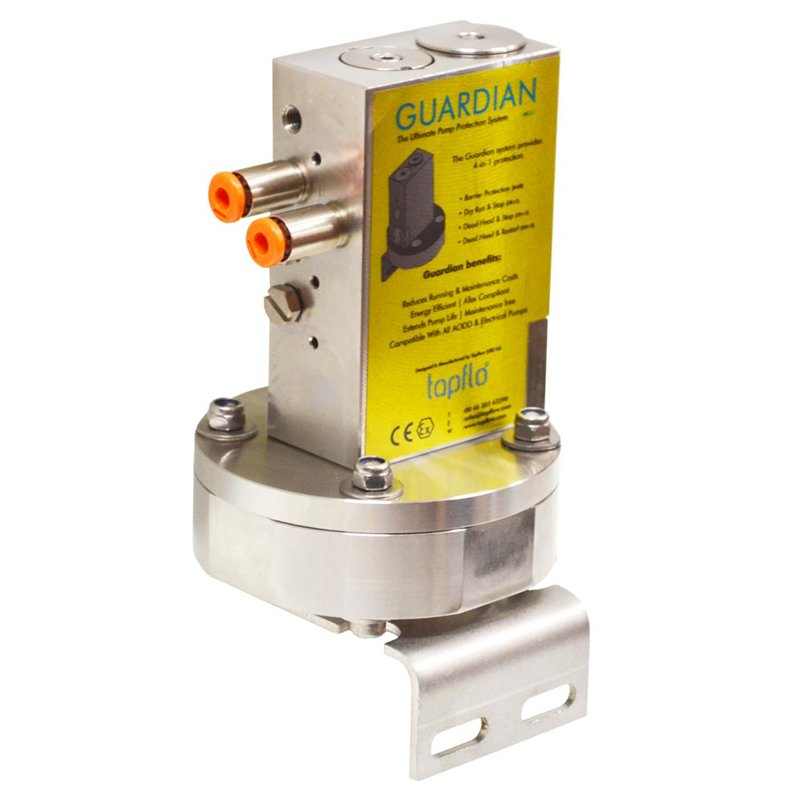 The Air Operated Diaphragm Guardian System monitors fluid pressure, changing its output if the monitored pressure rises above or falls below the set point of the Guardian (dependant on configuration), controlling the associated pump according to the following applications:

The Air Operated Diaphragm Guardian System monitors the fluid discharge pressure of the pump, stopping it if the pressure falls below the setpoint, caused by a lack of media on the suction causing air to be ingested into the pump. (PDRN System)

The Air Operated Diaphragm Guardian System monitors the fluid discharge pressure of the pump, stopping it if the pressure rises to the setpoint, caused by a closed valve or overpressure in the discharge line. (PDHS System)

The Air Operated Diaphragm Guardian System monitors the fluid discharge pressure of the pump, stopping it if the pressure rises to the setpoint, caused by a closed valve or overpressure in the discharge line. When the pressure falls below the set pressure, the pump automatically restarts. (PDHR System)

Barrier pumps (TB) have an additional set of diaphragms used to back up the primary diaphragms. In case of a breach, the liquid remains inside the pump, instead of leaking out through the air exhaust. The Guardian monitors the pressure between the primary and secondary diaphragms, stopping the pump if the pressure increases above the set point. (PDFM System)

This system is to be used in conjunction with the Diaphragm Alarm System which will immediately alarm and shut of the pump at an eventual diaphragm break. It ensures that no liquid will leak to the environment or to the air system of the pump – a perfect system where you require a high level of safety.

The system consists of a backup diaphragm pump (TB), and a control and alarm system. Under normal operation, the chamber between the backup diaphragm and the wetted diaphragm is set to vacuum by the control system. If any of the diaphragms would break, the pressure will rise in the vacuum chamber. The control system will then switch off the pump and turn on the horn. This system is allowed for use also in explosion hazardous areas since only pneumatic components are used.

Tapflo UK’s Pump accessories can make the perfect addition to your pumping requirements. Contact us today, to find out more about our full range.

Give us a call now:

Tapflo Group is an independent, family-owned, European manufacturer and global supplier of Industrial Pumps that has been operating for 40 years.

We are a leading manufacturer of Air Operated Diaphragm Pumps, Centrifugal Pumps and other industrial process equipment, operating across 75 countries.

Tapflo UK has been operating since 1998, now working nationally with end-users and pump distributors. We offer a wide pump portfolio to the UK for almost any application and installation, including bespoke pumping systems designed by our in-house Engineering Team.